Hailing from a family of artists, it is natural that Praveen Kumar showed an inclination towards Arts and Dance in particular, at a very young age. However, after coming under the tutelage of the eminent guru of Bangalore (Late) Smt. Narmada, Praveen Kumar realized the aesthetic depths of Bharathanatyam and decided to dedicate himself whole heartedly and purposefully to this ancient dance form.

A strong adherent to the traditional values of Bharathanatyam, he is now training under the celebrated Guru Prof.C.V.Chandrasekhar. Praveen is an accomplished Nattuvanar and Choreographer, & has skillfully created many dances, which have all been critically acclaimed.

He has travelled extensively around the globe and in India, taking part in prestigious dance and music festivals and runs the Chithkala School of Dance at Bangalore.

Praveen Kumar - an empanelled artist of the Indian Council of Cultural Relations (ICCR) and a ‘A’ grade artist on television - believes that dance is the ultimate medium of creativity expression ! 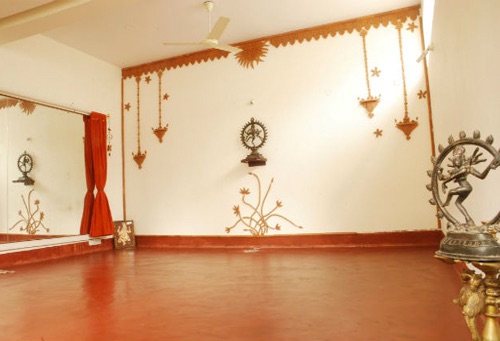 The school was founded by P.Praveen Kumar with the vision of introducing the future generation to the beautiful dance form of Bharatanatyam. The school is committed to the time-tested traditions of teaching, practice and performance, simultaneously exploring new interpretations of the dance form.

Chithkala School of Dance has been critically acclaimed for its efforts and has been instrumental in many highly appreciated dance debuts.

Students from the school have garnered awards and appreciation at various high profile competitions.Some of the students have also been bestowed with Government Scholarships to pursue dance.The team at Chithkala School of Dance has been invited to perform at various events by prestigious organizations.

The team has also performed for Live telecasts on television. Thus Chithkala School of Dance has been successfully playing its part in taking forward the dance form.